Where Every Song Brings Back a Thousand Memories!

A Song For Every Memory...

Everyone Wants Someone To Love!

Singing in the Rain

Singing and Dancing in the Rain!

Zoom Back to your Memories

I'm Stacy Kincaid, spokesperson for Great Music Memories. Welcome to our website. GreatMusicMemories.Com is the home of three great radio shows and more, Vintage Gold Classics with Bob Francis, the RocketMan Roberts Classic Radio Show, Inside Radio Today and Under the Bushel.

And before you go, don't forget to visit the "Bob's Picks" page. You may be able save yourself some money and be treated fairly and honestly by the businesses on Bob's Picks.

Mission: To give the older crowd a golden opportunity to listen to their favorite songs from the late '50s through the early '70s, while being entertained. And, to provide radio stations with enough information about the shows to make a valid decision. Radio station folks should select the tab "vintage Gold Classics' and the drop down "Radio Stations" tab.

Bob Francis is the host and producer of Vintage Gold Classics, but the real star of the show is the music. Bob's big friendly voice keeps listeners engaged by letting them know the artist's name, the title of the song, and the year it was released, all things that new listeners appreciate. The songs are picked from the top 100 hits of the year they were released, so they are all pretty good tunes.

Bob feels that "Every Song Brings Back a Thousand Memories" and breathes new life into those old memories you just can't get out of your head. After you listen to VGC you are guaranteed to be humming some tune Bob has played on the show.

There are many radio shows that play Classic Hits...but the difference with Vintage Gold Classics Show is that you get a Radio Show that is presented with passion from the presenter! You just know from listening to Bob's show he loves what he does. It's a show that has everything you want from a radio show. It's "old-school" radio with shows that entertain, have a human hand in the production, and aim to provide entertainment and service to you, the listener.

Mission: Provide reliable, trustworthy sources for Great Music Memories fans to purchase supplies and services from. Like old-school radio, products and services that were presented by the show host were deemed by the listener to be a good deal and provided fair treatment for the listener.

Visit the Bob's Picks page to see what's cooking there. Bob also highlights a single product or service in the single commercial in Vintage Gold Classics and Inside RadioToday and the 3 commercials inside RocketMan.

Mission: To give the older crowd a golden opportunity to listen to their favorite songs from the 70's through the early 80's, while being entertained. Many of the stations that carry Vintage Gold Classics have asked for a show that features more seventies music, and even some eighties music. Bob's answer to that is a new show called RocketMan Roberts Classic Radio Show. This show will feature a lot of classic hits from the '70s. But since classic hits come from all decades and genres of music, you may hear some show tunes, some country, some late '60s, some '80s and even a jump into the '90s as well. It could very easily be aired following Vintage Gold Classics. 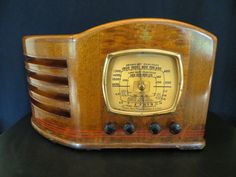 The last mission is to remind broadcasters of how radio was of service to the listeners. Tight editing, no dead-air, modular segments, use of jingles, liners etc, all aimed at keeping the listeners' attention on the the program. The show is well-produced and keeps you entertained and informed.

The show originates from a small city in the middle of Pennsylvania called Pottsville, where Bob worked as a staff announcer and news man back in the '70s on Pottsville's WPAM, Great Radio 1450.
Bob is also a military retiree, with 27 years of service in the Pennsylvania Army National Guard, and another ten years covering the Guard's great actions and efforts as a civilian media production manager. Bob's reports have been heard and seen worldwide on the Military Channel and the Pentagon Channel.

Bob retired, and after a short disappointing stint as a part-time announcer on a local radio station, he decided to develop a show to entertain listeners and provide radio stations with high quality programming. The result was Vintage Gold Classics. The show reaches thousands of listeners all around the world, airing more than 100 hours per week. RocketMan Roberts followed when stations asked for more 70's music. Inside Radio Today was created out of curiosity, a desire to learn and share great ideas with other radio people.

Enjoy your visit to Great Music Memories, and tell your friends about us too!